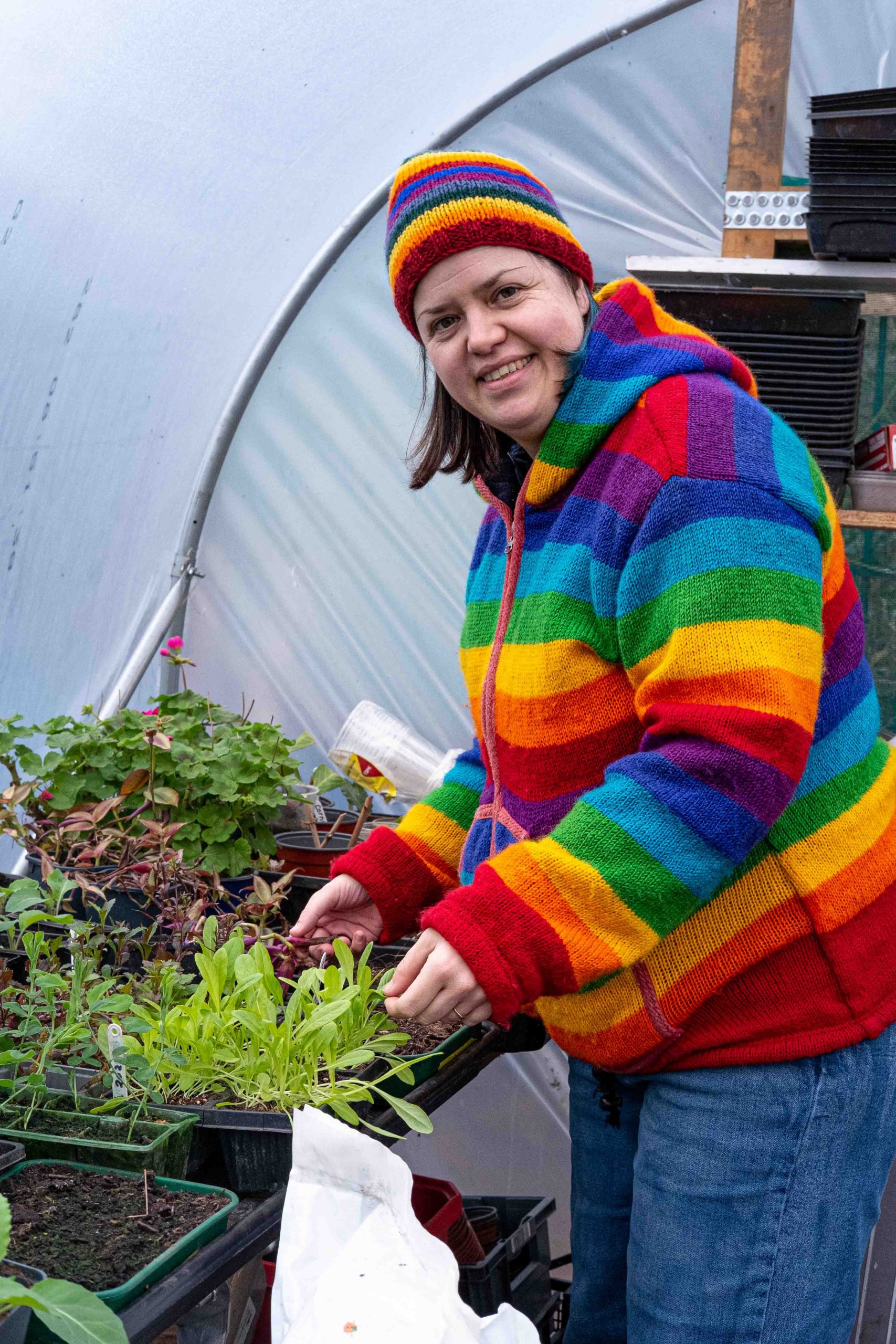 Originally, it was my mum and dad who got me started. We always had a garden. My mums from a farming background in Wales and my dad likes gardening too. So my memories of being a little girl were mainly in the garden watching my dad doing gardening. He gave me a little section because I said, “I want to do some gardening!” So I never started growing crops, I started doing a little rockery. I put some plants on and I’ve always liked lavender, so I suspect I picked a lavender to put there.  My mum was on a farm in a place called Llanidloes. No one knows Llanidloes- it’s just a little random place that no one knows. My gran and grandpa are buried in the Llanidloes cemetery. My aunt lives in the next town along because my uncle used to be the Mayor of Rhayader, funnily. So they live in a beautiful house that has since been taken over and turned into a BnB.

With all the issues with climate change, I think it’s really important that we are growing fruits, vegetables and everything with a leaf on because of the fact it helps with carbon capture and it also helps keep the place cool. I personally have realised that since planting and watering in both sections of this garden, we actually have almost a biosphere. There is a bubble here, you can feel it. On the nights that I was watering the front and the back, the temperature in the whole area dropped about 5 minutes after. You could feel the temperature drop and I suspect that that is not the case if you don’t water and you don’t have plants around- I suspect that the temperature stays up. So if we could actually manage to do that further afield, all around, I suspect that it would bring the world’s temperature down a bit. I’m aware that in India they had a day of planting trees, every person planted a tree across the middle of India a couple of years ago. So, even they realised the importance to the point of the government taking it seriously and saying, “we need to plant more trees”. I’m aware, very much so, of the desert creeping closer into Europe. People are desperately trying to find measures to stop that. Planting trees, instead of cutting them all down in order to have animals; so consequently you also need to take into consideration whether we should be eating so much meat. So, I started to eat more vegan food as a consequence of becoming more aware of that too. So it’s not just a case of teaching your kids about gardening, per se, but about how everything interacts with each other and with itself and you can’t just say, “I am a human and I am going to do what I want, how I want!” because it’s not that simple. We can’t do that. Well, we can but we need to have more respect for everything else that’s going on around us.

So consequently, we’ve been involved in stuff like bird counts, butterfly counts and things where you can actually help monitor how the environment is doing , we’ve been doing that as a family. We have great fun with that. I think they’re starting to enjoy gardening more now because they see me doing it and I get them involved. Sometimes just basic things like shaking gravel on sections and picking leaves. They seem to enjoy harvesting far more than the rest of it, but you can’t just have the food without putting some effort and energy in. I’m also very aware of the psychological impact of being around nature. It has helped me greatly throughout my life in reducing my anxieties and calming my mind. It’s almost quite meditative sometimes. It’s fantastic in so many ways. I’ve been doing a gardening course here for the last 2 years and I feel so privileged to have been asked to do it because even throughout lockdown, because it’s on my doorstep, I can leave my kids. Two hours a week away from the kids minimally has done me no end of good in itself. And the fact that it is just planting or picking leaves or just doing something really quite quiet and calm with other people, which is why I like the community part. You can do it on your own but I enjoy it more with other people, quite honestly. There’s something about it. Where I moved from, I think that’s what I missed the most. At my previous block of flats, I was involved in a community garden there, so I put so much effort into that in terms of planting stuff and watching stuff grow, and then walking away from that and thinking, “oh! What am I going to do now?” You can’t go back and dig it all up and take it with you, you’ve got to leave it there, but it’s like I’ve gone back over the last couple of years and it honestly looks stunning. I’m so pleased that I can see the progress and the impact that planting a little piece of leaf has had on the garden, because I planted some hops. It was only a tiny little thing and the first year it didn’t grow very much, and the second year I didn’t see it, then I moved and I was gutted because I knew that it would come into bloom in the third year. It’s not far from here, so on the third year I visited and it just burst and in the summer it’s just absolutely stunning. It goes over this arch on the sides and around the edge. It’s just beautiful. In terms of why I planted the hops: I went to Sweden a few years ago and I went to the Viking Museum and they had a little garden where they were showing all of the old plants that people used to plant and one of them was hops so I wondered why people don’t plant that anymore. Forget the fact that you can make beer out of it, it’s a beautiful plant and has many leaves and grows really fast as well. It can go all across the wall and create a wall of leaves quite easily, so why don’t people do things like that? You can go, “hmph” or you can go, “well, why don’t you do it yourself then?” So I started planting a lot of those things. I love gardening, seriously. What gets me is that ive had to walk away from so many gardens that I’ve spent time in and just leave it, when you’d actually quite like to stay and look after it. I am starting to realise that when you plant things it’s not about planting things for you, it’s about planting things for the generations to come. It’s all fine and well saying someone else will do it but who do you think is going to do it? It has to start with yourself and you have to start putting something in. Yeah, it takes your energy, it takes up time. It does. And you might not see the fruits of it. I bought an apple tree and I may never see the fruits on this apple tree but the fact is that I needed to buy a tree! It’s all fine and well expecting someone else to do it but they might not have the money or the resources. So instead of expecting other people, get off your bum and do it.

I help to maintain things and hopefully help to make things look a bit more pretty. In the section that I’ve been trying to work in during lockdown, I think we’ve got a flower for every season. So when you go outside there should be at least a flower that is out and that was part of my thinking that you need to be able to have that all year provision for the birds and bees and whatever is there because not everything hibernated now. It used to be that things hibernate but now it’s too warm. A lot of animals that you think would be are not hibernating when you think they are and frankly there needs to be something around for  them. So that’s what I’ve been working on. Whether people appreciate it or not, I feel it’s not necessarily about the people, it’s actually about nature and helping nature. We’re taking too many resources from this planet and not putting enough back but…yeah.