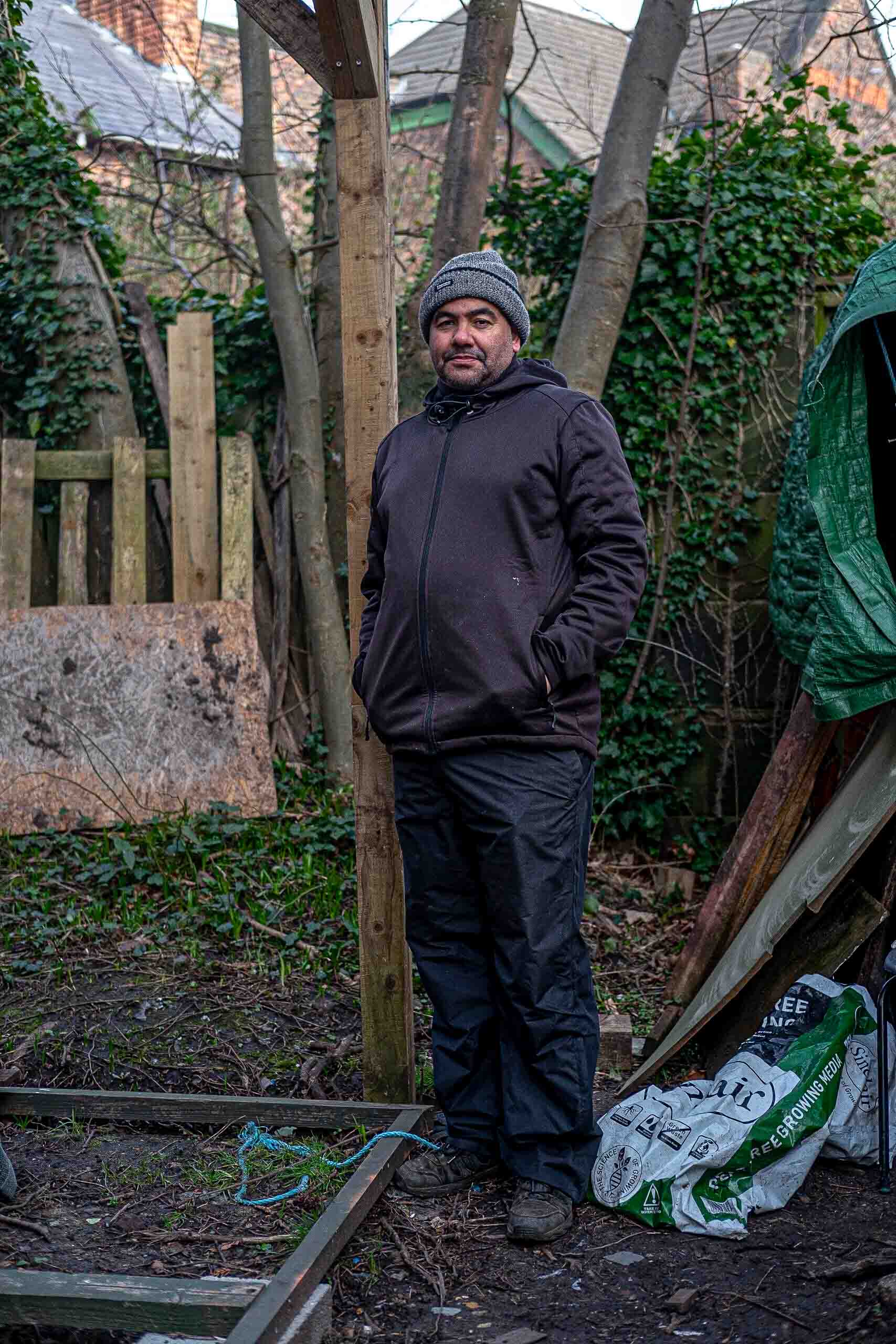 I started coming to Sudley 4 years ago because I had a stroke and then obviously I couldn’t do any work or anything. And then I found this through the brain charity and it’s been a godsend. Otherwise, I’d just be in the house cooped up but I come here and they always have something for us to do. I call it ‘Organic Therapy’. If it wasn’t for this, God knows, we’d all be cooped up in the house going crazy. The staff, Lis and Lucy, are brilliant and without them there’d be no project. They struggle and they get through it. Even all through Covid they kept it all going. If it wasn’t for them, we volunteers wouldn’t be able to do it. They are the foundations, they are, they’re brilliant. I have a couple of garden projects that I go to. I just like being outside. I come here and another in town, Faith 4 Change. That’s different to this, it’s more like an allotment- you grow the food there for the food bank. In order for these things, you need good leaders that are hard working. If you have lazy people it doesn’t happen, it doesn’t work. So, they are, they’re good.

I’ve always liked gardening and being outside, but since I’ve been ill it has made it more apparent. Through Covid, everybody around the world has realised how valuable green spaces are. But I love it. Even my grandkids come here in the summer, they come with me. They go to the forest school here. I just love it. They have different things like forest school for the kids through the summer holidays and half term. There’s somewhere and something for the kids to do.

Yeah [I feel like I’m making a difference in my community] because we’ve raised the funds now to have all of this garden all landscaped and done the way we want it. So were going to have a polytunnel so we can grow stuff and more beds to the height that we need them and the old changing rooms- that’s going to be like an eco-building so then now we’ve got no indoor space so if it starts raining, we just have to put a tarp up and get underneath that. But when we get the building done, we’ve got indoor space for when the weather turns. Other people will gain from that because if they want to do yoga or mindfulness, they’ll be able to run their classes from there or from the garden. In this garden, we have the forest school for the kids but we also have tai chi as well out in the garden for able-bodied and non able-bodied people who can do it on the chair. It’s unbelievable.

When I got ill, I was working, I was up and on the job for 8 o’clock working and all the rest of it. And then that happened overnight, boom! And it’s like what happens now? I was adamant that I was going to go back to work, but I was just kidding myself. If you don’t come here and just do one day a week, it’s something to look forward to. Otherwise, you’re just cooped up in the house, doing what? Looking at the telly or looking at the news and making yourself even more depressed. But one day a week, it’s a little thing to look forward to. And you come, and you’re here and you have a laugh and you do something and for that day you’re actually normal. The staff doesn’t put any pressure on you for anything. You do what you want or you don’t. If they don’t hear from you for a few weeks, they message you and text you to see if you’re okay. It’s a lifeline for a lot of people, a lot of us. I was a joiner before; I was active and then all of a sudden you can’t do that. And what bits you can do, you’re doing it a hell of a lot slower and you’ve got cognitive issues. So, before I could just look at something, and now sometimes, I can get it, and sometimes I can’t. That takes a hell of a lot of getting used to. And then you have to come to terms with there being some stuff you can do and some stuff you can’t. But like I said this gives you a little hope to come here once a week and do something or not do something, just sit and talk. The doctors should be prescribing it. What benefits this gives you, it does a lot more than a doctor saying ‘here you are, take this pill’, a hell of a lot more beneficial to you. It makes you feel human again. The likes of these people who run these little charities like this, they’re only tiny but it’s the likes of them who should be getting the honours not all these other people who have money and wealth it’s just another key to another door for them, these people need it, they need the recognition. Without them, we couldn’t be here doing what we’re doing. And then we’d be a further drain on the NHS.

We do tinctures and all stuff like that. [Name] will brew you up a little concoction. We do baking. One day we made elderflower pancakes, and we made elderflower syrup, jam and bread in plant pots. You mix all of the ingredients in one of those plastic zip lock bags and then you knead it and then you put it in a terracotta pot, cover it with foil and drop it in the fire. And then when it’s ready you take it out, you cut it and put in the fresh jam that we made. My grandkids came and did that and they were made up, they were saying “we made bread in plant pots!” It’s educational as well, you’re learning stuff.

My grandkids come and they have a strawberry patch there, and they just sit there all-day eating strawberries and tomatoes. She says, “I don’t like the tomatoes from the shop, I only like my grandad’s tomatoes.” They’re learning and she says, “and this is this plant, Mum, and that is that plant”, “how do you know that?” She says, “I’m an expert because my grandad knows.” So, it’s getting them involved from an early age as well. Once she picked apples and one of the apples had a leaf still on it and her friend said ‘what are they?’ and she said ‘they’re apples’ and she said ‘they can’t be because they’ve got leaves on’ she said ‘that’s how they grow. With leaves on’ she said the little girl didn’t even know. It gives you the ground, it gives you a link with nature. Here we’ve got people from all different backgrounds and there’s always somebody who comes with a fact about what you’re doing, so you’re learning a little bit as well. It’s lovely, it’s wonderful, it’s unbelievable.

City and Guilds were running a Horticulture Level 1 and Level 2. So, I did them and then the tutor, Emma, said they’re doing RHS in Myerscough College in Croxteth cause that’s where she comes from. She said why don’t you do that, I said it’s too much, i can’t take in all that information now after being ill. I said I can’t get my head around it, I get all flustered. She said, “well, okay.” Then she phoned me and she said “I’ve got you a place and it’s all sorted. And I’ve got you support as well, so you’ve got you a support worker that we can get in to help you.” So, I’m doing an RHS one now on Thursday. So, it’s opened up another avenue for me and that’s really hard because you have to know the Latin names. So, I just can’t get my head around it but there’s support. The guy there, Andy, he’s brilliant, he holds my hand and nudges me in the right direction because they said there’s no reason why you shouldn’t do it because you know it and you’re good at it so there’s no reason why you shouldn’t get the certificate just the same as everybody else.

My family is from Jamaica so there and even here everybody grows something in a little pot, even if you’ve got no space- some thyme or some mint or something fresh that you can put in the pot and that’s how I got into it. I enjoy it. I like to try and grow stuff that is not normally grown. You know everyone grows tomatoes, one year I grew peanuts.

I got ill in 2018, so I’ve been coming here for about 3 and a half years. Everybody thinks peanuts grow on a tree, but they don’t, they grow underground. And they didn’t understand when I’d pull up peanuts from under the ground. In the summer here, if you put them in early enough, they can grow. Just like down in St Michaels, I’ve got avocados growing in the green house and a banana plant. The avocado takes 4 years, it’s only about 10 inches high but it’s growing. I’ve got all kinds of stuff: fennel, asparagus. I like growing unusual stuff. The likes of lettuce, you can just put that anywhere.