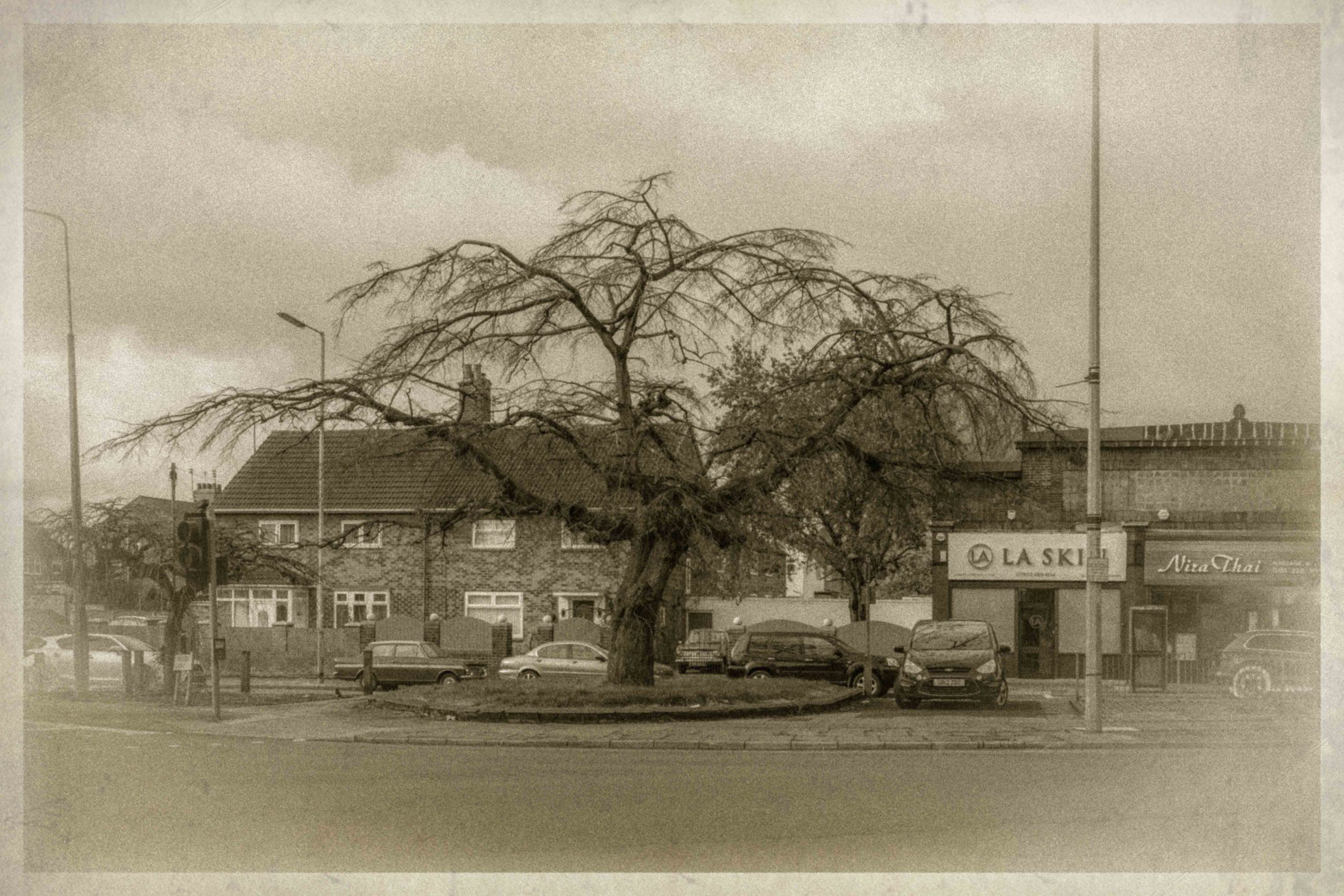 Queen’s Drive in Liverpool, A5058, is known as the inner ring road running from Sefton Park in the south to Breeze Hill / Walton Hall Park in the north. It was constructed for Queen Victoria’s Golden Jubilee when she visited Liverpool, and this facilitated her travelling literally around the city. It is now a tree lined dual carriageway, but the species of tree varied along the length of the drive. From Sefton Park to the intersection with Derby Lane in Old Swan / West Derby the tree population is mixed hardwood species that included an element of elm species (Ulmus spp). North of the intersection the planting was a monoculture of Wheatley elm, Ulmus minor ‘Sarniensis’’ with a component of wych elm, Ulmus glabra. Sadly, in the early 1980s all the elms succumbed to a virulent strain of the Dutch elm disease, Ophiostoma novo-ulmi, (DED) which had been introduced accidentally from timber imports from North America. In 1981, when DED was rampant and killing the elms, this tree began to show symptoms. At the time I was a Research Fellow at Salford University testing various possible cures for DED, one of which was a fungicide, Sodium Thiabendazole Hypophosphite, marketed by Merck Sharp Dome as ‘Ceratotect’. It was highly effective at controlling the disease, but the drawback was that it could only be administered by very high-volume injection into the tree, which took a lot of time and was therefore not cost effective as a general treatment, the exception being high value amenity trees. Without recourse to the City of Liverpool, I made the decision to try and save this magnificent specimen. Together with a colleague, Steve Kirby, we set up the injection rigs and commenced the injection process. I climbed the tree and pruned out all the branches that were showing symptoms of the disease and applied a solution of Ceratotect to the pruning wounds. While we were doing this work, an old lady approached us in an agitated state and asked what we were doing – she thought that we were killing the tree. We explained that we were in fact trying to save the tree as it had contracted DED. She was reassured and left us to carry on. About half an hour later she came back and showed us an old sepia print photograph of a young couple standing under the tree. The young man was in army uniform and the lady told us that the photograph was taken in 1916 and the couple was her and her fiancé. At that time, 1916, the tree looked to be roughly the same size as the one we were injecting and was at that time inside a gate leading to Lord Derby’s estate. She told us that her fiancé was 18 years old at the time the photograph was taken, and that he died on the Somme about six weeks later; that photograph and that memory was why she was concerned about the tree. This is a clear demonstration of people’s emotional attachment to trees and what they mean to them. Happily, our intervention saved the tree and it is still present and growing well on Queen’s Drive, see photograph 1. I pass it frequently and always think back to that meeting with the old lady and her attachment to this tree. Today, only one of the original elms on Queen’s Drive survives and this is a fine specimen of the weeping wych elm, Ulmus glabra ‘Pendula Macrophylla’ which is the subject of this story. It is situated on a traffic island at the intersection of Derby Lane and Queens Drive, Photographs 1 & 2.