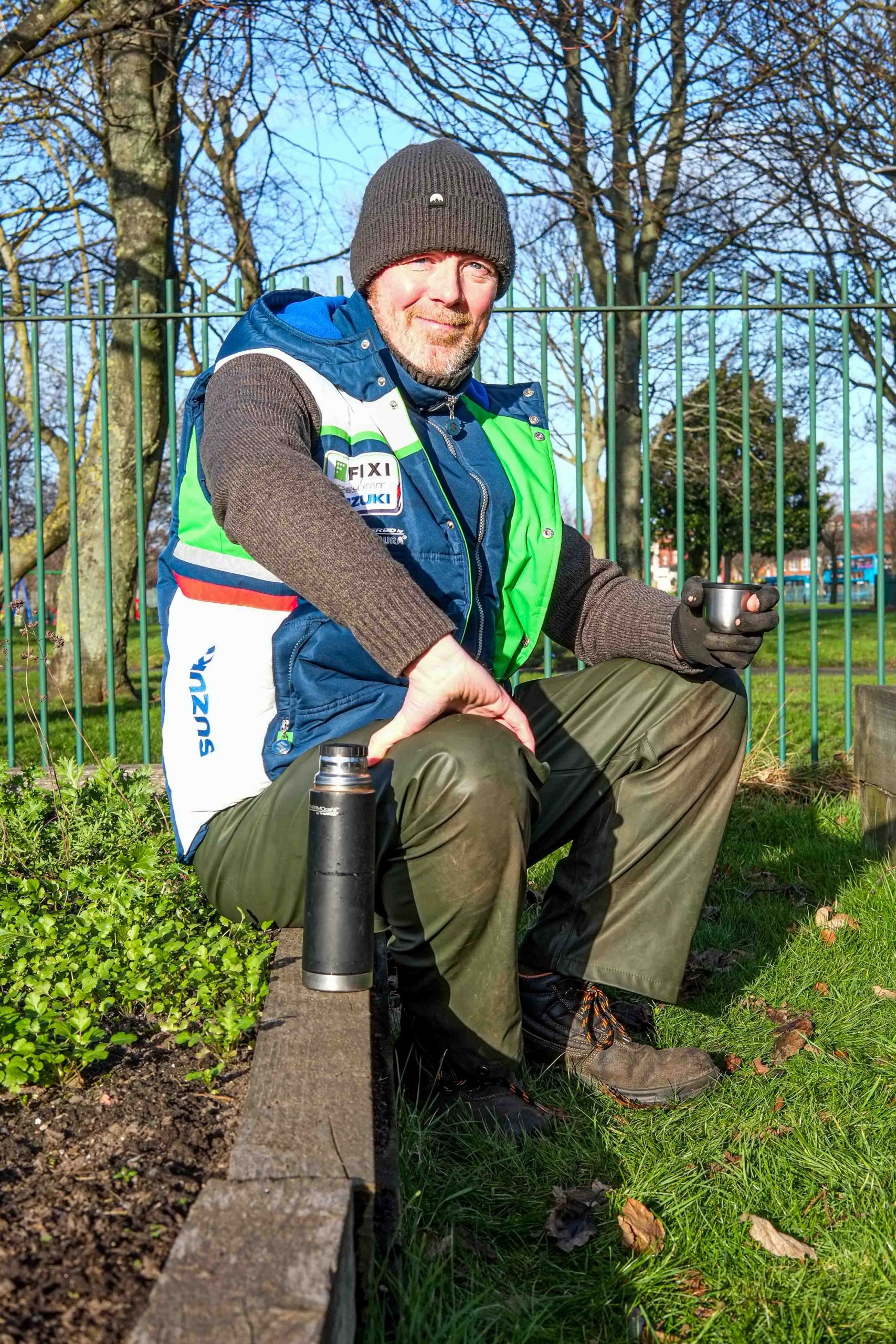 Places like this are lifelines because of the dangers like agricultural collapse through climate change and economic circumstances. We’re learning about how to grow things and some people will be forced to dig up their lawns at home and we can help them. If we can help people locally get through growing a bit of their own stuff, I’d be well up for that. An article I read talks about how China has been building up reserves in case of collapse. We’ve got no reserves in the UK.

You can see how people, wherever they come from, can relate to it because we get people coming from all over the world into this garden. I don’t mean they fly all the way up to here, but we’ll get people just wandering in and they’ve come from God knows where. They can instantly relate. It’s back to nature. This is something they can relate to because they’re coming from more, say, agricultural parts of the world or areas where they haven’t fully urbanised. They come here and totally feel relaxed. Its boss. You’re all working together and cooperating. It’s an equaliser.

I came back to the UK in 2019. I lived abroad for years. I didn’t plan to come back to live but I ended up coming back permanently. I just happened to come through the park because I live down the road. I came past here a few times, it was deserted but I’d look over the fence and be like “Oh! What’s that? There’s never anyone in there, what’s going on over there?” Then one day I came by and there were people in here, so I came in and they invited us in and I did a little bit of helping them with weeding these beds. Both parts used to be separated and run by two different groups. So, I came on a Tuesday and they said that on a Wednesday the main part is open. So I got involved from then and it just sprang from there and I’ve loved it since.

I’d say yeah and no to making a difference in the community. I mean, it is definitely making a difference because we have people coming here from all over the area, so that’s helping. I live down the road and I think half of the people don’t even know about it. So it’s kind of like, yeah, general in the community yeah, but I wish there was more awareness of green spaces and connections with nature with other people. It is getting better on our street, it’s growing, but I would like to see more awareness locally. I think if more people got into it, they’d really get into it. We could reach a point where people are in crisis and can’t access food. We’ve already got food banks now but if they dry up people need to be able to grow their own food or have some other green space where they can grow it. That’s in terms of necessity. The other part is that through involvement in these places you just get into it and love it. You feel part of nature spiritually. I’m an atheist and this is my equivalent of God, being in nature. It’s partly spiritual, partly economic.

I’m up and down. Sometimes I get fed up or feel a bit down. When being around nature, it just instantly chills me out. I’ve got plants and trees in my backyard;  bird life comes in, I’ve got a rat that comes in these days. I might be a bit down in the dumps and I’ll look out the window and there’s a few leaves starting to grow on a tree or a bird will sit on a branch and start chewing on something or wiping its beak and I’m just like, “yeahhhh!” It has that naturally calming effect. I can be as miserable as can be and I’ll see a bird and it’ll bring a smile to my face. Things like that are deep. If I was feeling down, a television program isn’t going to make me feel good, someone buying me something isn’t necessarily going to make me feel good but nature and natural things do. The life we lead today, people don’t realise how we were in touch with nature back in the 13th, 14th century or so. This country was the first to industrialise, it was the first to have an industrial revolution but to get to that industrial revolution involved the removal of ordinary people from the land gradually and then eventually fully. To this day, living in this kind of industrialised society, we’ve lost that connection with nature. I remember going to see my uncle on his allotment, he passed away recently, and he’d go “they’re carrots and spuds” and I’d go “but how can you tell? There’s just leaves sticking out of the ground!” I’d only ever seen the vegetables in a bag in the shops. Now I don’t think twice, I know what a lot of vegetables and fruits are when I see them but, to me, that amazement that I felt then I’m sure a lot of people today would have that if they only knew about it and had a connection with the food that they eat. People used to religiously say thanks for the food because it was out of the ground where they lived and if the crops failed it was a disaster. Now, if you get something from Aldi, Asda or Lidl you’re not gonna go, “Thanks Lord for the food we got from Lidl” or “Thank you, Asda” it’s not the same. I think, especially Britain and England, that separation of ordinary people from nature, which has happened through the industrial revolution right up to the present, has removed people away from these things. We need them. We’ve evolved over millions of years and we’re much closer to this than we are to Asda or Aldi in terms of our evolution. I’m not going to push people back onto the land, but if more people become aware of it, I think more people would actually start going there and getting into things. Of course, the big businesses will say that we’re not taking their customers away but I think more people in these kinds of urban areas would get into it. I think if you live in the countryside, you’d be more in touch with nature but in an urban setting it’s quite difficult for people to connect. It just evolves if you’re interested.

I remember first coming here and helping them weed and every plant I’d be like, “Is that a weed? Is that a weed? Is that a weed?!” I didn’t know my arse from my elbow but over time you become more familiar and now I can just wade through and pick out the weeds and know what is what. That familiarity doesn’t happen overnight and you make mistakes and kill a few plants. You just learn over time. I could have just been going past here and not interested in the place on the other side of the fence, not bothered to help. Until you get involved you’re oblivious. We got funding to do some front yard gardening. Ali, Jan, Christine run it. People came to South Park and learnt about things they could grow and a little bit about composting. They were given the option to have little planters put in their front yard or I got a little tree for mine. Those who’ve done that have learnt a bit as they’ve got along. I put leaflets all around our way. In my street, over three lockdowns, I’ve just noticed things. There’s always a few people who have a little bit of interest in gardening but that’s growing and there’s more people at the bottom of the street who are. I think over time it will happen.